Gender Diversity – What the AFL can teach us

Gender Diversity – What the AFL can teach us

As we approach the first Saturday in October, the nation, particularly WA, is abuzz with talk of the AFL Grand Final.  The anticipation and excitement building as each week of the finals series is completed. Workplace banter is not about the recent change in leadership of our National Government but of who will be the 2015 AFL Premiers. Females and males in our office are equally as interested in hypothesising about the result and planning where to view the big game. All this talk of the AFL led us to contemplate the inroads the AFL has made around Gender Diversity over the years and what we can learn from them.

In recent years the AFL has worked diligently at improving gender diversity within its ranks and the game in general.  Women are now appearing as umpires, on the bench as physios, trainers and coaches. Women are also represented on the Boards of all the clubs and Richmond has a female President. While the current AFL CEO would argue there is still much work to be done, its relative success in a traditional male bastion provides an insight for other organisations embracing gender diversity programs.

The case for gender diversity in corporate Australia is compelling. Benefits suggested include; improved financial performance, greater employee retention rates, improved idea generation and more opportunities for talent attraction and recruitment. Not to mention that ignoring gender diversity is ignoring half of your available talent pool! 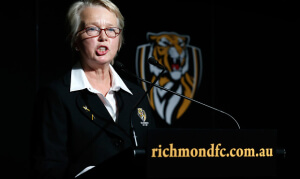 The AFL’s journey raises some key learnings. It is critical to have a well-reasoned and comprehensive plan which embraces and assists in managing change. This includes understanding your current stakeholders and their readiness for change. Evidence suggests that around 41% of the supporter base for the AFL are female. As all the major sports compete for devotees, offering a competition that attracts high numbers of male and female followers alike, makes for a much more successful competition. The emergence of females in roles outside of administration/support roles is a necessity in achieving this.

Key advocates must be identified and utilised to champion diversity. For example, Richmond CEO, Brendon Gale is leading the charge and has committed to unconscious bias training for club employees and has pledged that any man invited to sit on a panel/conference challenge the organisers to ensure gender balance in their program. In any organisation leadership at all levels play a critical role to reinforce, i.e. ‘live and breathe’, the cultural change required on a daily basis.

In partnership with the AFL and the Australian Sports Commission, Richmond Football Club has initiated a research project investigating gender equity throughout the industry. AFL CEO Gillian McLachlan has joined a Victorian “Male Champions of Change” group and a number of AFL representatives are part of an Elite Sporting CEO Male Champions Group.  These are all important initiatives to get the sporting industry and others to put Gender Diversity on the strategic table.

Gender diversification, for many organisations, is at its very nature a significant cultural shift and any initiative of that size and nature requires research into the current state and appetite for change, ongoing and constant monitoring, management and role modelling.  The AFL are making progress and we watch with interest to see what headway they make in the coming years. In the short term we hope for an Eagles victory in the Grand Final!

Briscoe Search and Consulting Gender Equity Division can show you how a successful program can be envisioned and implemented to support you in closing the gap and reaching sustainable gender diversity outcomes.